This week, I visited The Louvre and Tuileries Garden, an exhibit at the High Museum of Art in Atlanta Georgia, USA. It is showing through January 19, 2014. The Tuileries are on the must-see list of many who visit Paris. It is graced with Art that saturates the soul and bathes you in its beauty.

The Tuileries started out as a private garden created by Catherine de Medici, as the garden of the Tuileries Palace in 1564. It was opened to the public for the first time in 1667. Later, after the French Revolution it was established as a public park and today it is still one of the focal points of the city.

The High Museum exhibit brings the wonders of The Tuileries to an American audience. It features more than 100 works, some never before seen outside of France.

If you get a chance, come down to Peachtree Street in Atlanta and take a walk through the picturesque, boxed holly trees in the High’s courtyard, and feast your eyes on bronze sculptures by Aristide Maillol, including “Mediterranean” (aka “Latin Thought”) 1923-1927.

The Beauty in this piece lies in the simplicity of the work. The triangular limbs intertwine freely with one another to form the figure of a woman deep in thought.

Another Maillol bronze in the courtyard, “Venus with Necklace” 1928, is equally impressive. Don’t pass these by. Take the time to stop and enjoy their beauty.

Then, entering the ground floor of the exhibit, there are several more statues that leave you breathless. One example was François Joseph Bosio’s “Hercules Battling Achelous as Serpent” 1824 in Bronze. 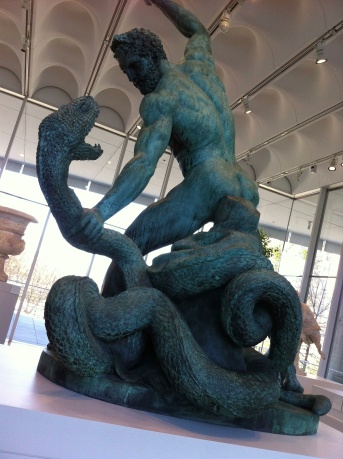 Another is the marble sculpture “Faun” by Antoine Coysevox from 1709. 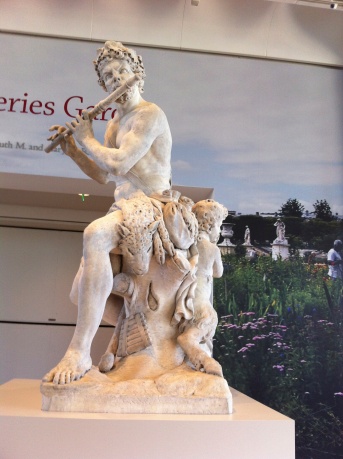 This has an adorable satyr on the opposite side.

The second floor reveals the history of the Tuileries Palace and Garden. In addition to more sculptures, there are artifacts from the time of Catherine de Medici, including this “Mold for the bust of a Cloaked Woman” from the Workshop Of Bernard Palissy. ca. 1550-1570.

Also included are items from the time of King Louis XIV, who expanded the garden, such as this wonderful tapestry “Procession of Louis XIV in front of the Tuileries Castle: October, The sign of The Scorption”  produced in the Gobelins Royal Manufactory (after a design by French painter Charles Le Brun.) This was one of 12 tapestries made to depict the French Royal House and the months of the year.

This one represents October.  The zodiac sign is featured at top center and there are signs of autumn throughout. King Louis XIV is in the background with his procession, weaving through the Tuileries Garden away from the grand Palace.

There are several rooms to see on this floor, one of them provides comfortable seating to enjoy a contemporary video projected on three screens. This gives you the sensation of walking in the garden and passing people as they enjoy a lovely day in Paris. Do sit and take it in.

Entering the third floor you see a large wooden model of the Louvre and the Tuileries Garden, in the background pictured on a partitioning wall is a scene filled with all the pageantry of a bygone era.

Many artists were inspired by this great garden and its Tuileries Palace. My favorite painting is one by Pierre Tetar van Elven, a Dutch artist from 1828-1908.

It is titled “Nighttime Party in the Tuileries, 10 June 1867, on the Occasion of Foreign Sovereigns to the World’s Fair ” 1867 (above), oil on canvas.  It really takes you into the lavish lifestyle.

Several fabulous engravings and etchings are displayed. Especially interesting was this watercolor and etching on on laid paper (above) by an unknown artist from 1784. It documented the first manned flight in a hydrogen-filled balloon, which was launched from the Tuileries in December of 1783 by professor Jacques Charles with Nicolas-Louis Robert as co-pilot. They ascended to a height of about 1,800 feet and landed 2 hours and 5 minutes later.

Photography buffs will love the last room. It is filled with historic photos of the gardens by some of the great photographers of the world, including 13 prints by Eugène Atget, and others by Louis Vert, Andre Kertesz, Jaroslav Poncar and Henri Cartier-Bresson. 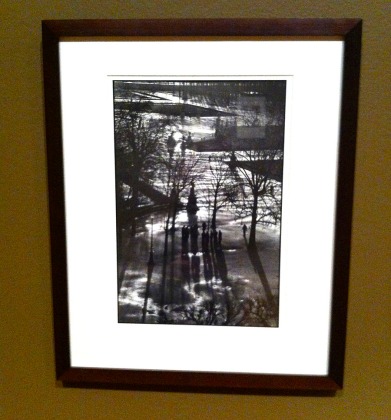 This is a once in a life time chance to experience the wonders and the beauty of The Louvre and Tuileries Garden right in your own backyard, Don’t miss it.

The exhibition runs through January 19 in Atlanta and then will travel to the Toledo Museum of Art in Ohio (Feb. 13-May 11) and the Portland Art Museum in Oregon (June 14- Sept. 28).

All text and images by Karen Nurenberg Rothstein, a contributing writer for Labeauratore.