After 25 years of providing art classes in St. Petersburg, Jay and Judith Dazzio have moved Dazzio Art Experience from their Central Avenue location to a newly renovated section of The Arts Exchange on 22nd Street South.

As part of their reopening, a collection of Holocaust paintings by Judith Dazzio is on exhibit, featuring more than 20 of her works. The exhibit is also scheduled to be shown in New York in April.

“Several decades ago while in elementary school, my class was visited by a Holocaust Survivor, who’s story has stayed with me throughout my life. I can still see the numbers on her arms. I can see the faded pictures of her children who had been killed, and how she cried when speaking about them. I began this series ten years ago, basing many of the paintings on her story. Therefore, many are historical, limited to the Warsaw ghetto and Birkenaw. The rest of the paintings are in honor of her children, and all of the children lost or who bear the scars of having the live through that time. The paintings reflect my emotional reaction to the helplessness and fear that they must have felt. The historical paintings were also important because I wanted them to be accurate, creative and powerful. They had to show one artist’s vision and style. I believe that I have achieved a melding of historical facts with powerful paintings that evoke emotion and thought. I am pleased that the three paintings from this series that have been entered into competition have all won top international awards.” – Judith Dazzio 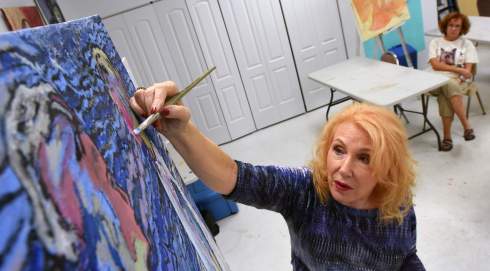 The Arts Exchange is growing out of 50,000 square feet of warehouse space purchased last December by the nonprofit Warehouse Arts District Association at 22nd Street South and Fifth Avenue.

The first phase, construction of 28 artist studios, is set to begin in the next few months with a projected completion date of June.

Photographer • Artist • Journalist • Archivist • Vandal END_OF_DOCUMENT_TOKEN_TO_BE_REPLACED
This entry was posted on Thursday, November 17th, 2016 at 6:16 pm and posted in Uncategorized. You can follow any responses to this entry through the RSS 2.0 feed.
« ‘Five Decades of Photography’ is a memorable visual excursion at MFA St. Pete
20×16 at Cass Contemporary Tampa »