Shark Toof on the Edge: Live and in person.

TAMPA – On a mild, Wednesday, October night, many of the regular faces gathered at the rooftop bar of the Epicurean Hotel at Edge Social Drinkery. It’s fun to come up with personas while people-watching. The businesswoman in town to review local corporate strategy, the law clerks gossiping about the partners, the athlete’s wives, with athletes in tow, intent on kid-free socializing, the sous-chef, the detective, the realtor, the life coach, etc… All unwinding and enjoying the carefully crafted libations on offer.

But there were some new faces in the crowd this night, and they had come for one particular purpose. That purpose was an imposing black canvas, spotlit near the front door, that couldn’t help but grab the attention of everyone who entered, including the regulars.

The fact that the artist himself was on site, spraying some finishing touches to the canvas, may also have drawn some attention, but the piece itself was certainly a stunner. A massive red shark appeared to be emerging from the dark waters of the canvas background. The mere visual suggestion of that infamous animal can strike fear in a man like an icicle to the heart, and this portrayal seemed to have an eerie kind of intrinsic spirit. One that made it feel like more than just paint on canvas, and offered something greater than just a lizard-brain fear response. It emitted a kind of inner strength, the kind that can be transferred to the viewer in a sort of empowering way. 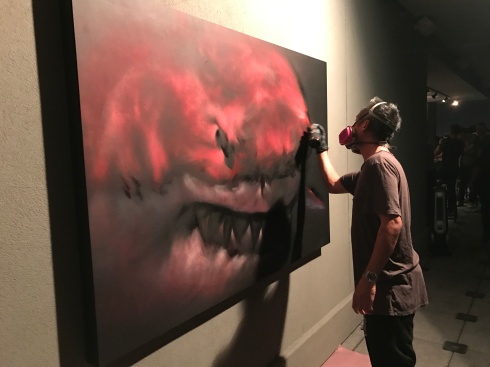 And that is the specialty of the Los Angeles based artist Shark Toof. His (much) larger-than life sized murals have been grabbing the attentions of all who come across them, and gaining him global recognition along the way. Tampa Bay is familiar with his massive piece covering a back side of the State Theatre in St. Petersburg, and his mural in East Coast’s Eau Gallie Arts District (EGAD) is also a local favorite.

This night at Edge was a special event put on by the Tampa gallery Cass Contemporary, on South MacDill, to promote their show “Red Everything,” a solo exhibition featuring new works by Shark Toof. The exhibit runs through December 30, 2016. (with a short break for ArtWeek Miami, where Shark Toof is also on view at their booth in the Aqua Art Fair).

When the artist took a break from painting and removed his gloves and respirator safety mask, a man approached him immediately, with cocktail in hand and was overheard asking about the work: “So… like, what’s the concept here?’

After a short moment of contemplation, Shark Toof replied: “The concept is…  Shark.”

Not deterred by the minimalist answer, the man continued the conversation and seemed genuinely interested in acquiring the painting. After he began speaking with a gallery representative I took my own opportunity to ask a few questions of the artist who’s been a favorite of mine for several years now.

L: What can you tell me about this particular piece?

ST: I love the forms, there’s a lot to discover in there. It’s incredible when all the right circumstances come together and you do the thing that you envisioned, and this piece fucking rocks! I mean, it’s really sexy! I guess there’s always a surface level of interpretation, but there’s so much more texture and things to discover within the piece and that’s the beauty of this piece.

L: I heard you say you kind of want to keep this painting? Do you always feel that way about a canvas when it’s done?

ST:  I don’t really mind when pieces are acquired because it’s going to someone who loves it and it speaks to them. That’s the most important part. When I purchase art it’s because it speaks to me. I don’t gravitate towards polished work, I like to see the hand (of the artist), I like to see if he was troubled, worried or struggling.

L: Will you use this piece as inspiration for other, larger works?

ST: Probably not, each battle is it’s own unique situation.

L: You’ve obviously been in St. Pete before, is this just your second time working in the Tampa Bay area? What are your impressions of it?

ST: This is my third time back here. I love it. All i can say is: Weekie Wachee – done! Next up is Sunken Gardens I think.

L: So I saw some Shark Toof stickers up around St. Pete.

ST: I don’t know anything about that.

L: Ha, Ok, well have you done any other street work in the area?

ST: Well, um,… that’s for you to discover. Treasure hunt.

Ok, so I’m always on the lookout now. Haven’t seen any other sharks lurking around here yet. Let me know if you’ve come across any.

In the mean time I’m off to Miami for Art Week. Hope to post some more Shark Toof and other highlights from Cass Contemprary and the rest of the circus there this weekend. There’s so much going on there I’ll never be able to fit it all into my little dinghy of a blog. I think I’m going to need a bigger boat.

ALL TEXT AND PHOTOS BY LANCE ARAM ROTHSTEIN

Photographer • Artist • Journalist • Archivist • Vandal END_OF_DOCUMENT_TOKEN_TO_BE_REPLACED
This entry was posted on Thursday, December 1st, 2016 at 10:43 pm and posted in Uncategorized. You can follow any responses to this entry through the RSS 2.0 feed.
« On the Street in: Denver