‘Five Decades of Photography’ is a memorable visual excursion at MFA St. Pete

ST. PETERSBURG — Showing at the Museum of Fine Arts St. Petersburg is a photography exhibition so comprehensive, walking its galleries feels like a full course in photographic history.

On a wall, near the passage into one of the MFA galleries, hangs a smallish rectangular piece of black cloth.

Lifting up the cloth, ducking your head underneath and viewing what’s enshrouded there, may be as close to time travel as any one of us will get.

Modestly framed and behind a piece of special glass is “View of the Boulevards of Paris” from 1843. It is a salt paper print from a paper negative, both made by British photography pioneer William Henry Fox Talbot. For photography lovers, this is just one of the many unique and enriching experiences to be had by visiting this exhibition.

Running through October 4, “Five Decades of Photography at the Museum of Fine Arts, featuring The Dandrew-Drapkin Collection,” highlights about 200 images from the museum’s impressive holdings, including important works from virtually every famous photographer since the birth of the art form in the mid-19th century. The exhibit’s list of famous photographers is so thorough, it’s hard to think of anyone who’s not represented. It includes early pioneers such as Fox Talbot and Matthew Brady; groundbreaking 20th century artists such as Edward Steichen, Alfred Stieglitz, Paul Strand, Edward Weston and Imogen Cunningham; and controversial image-makers Robert Mapplethorpe, Andy Warhol and Sally Mann.

Chief Curator Jennifer Hardin organized this, her final exhibition at MFA, and what a positive note on which to end. Many of the photos in the show were gifts from Ludmila and Bruce Dandrew and Chitranee and Dr. Robert L. Drapkin. Their generous donations between 2009 and 2012 enabled Hardin to put this collection together, which she has characterized as a “visual history of the modern era.”

Today we are inundated with photographic imagery from every angle, but the experience of viewing an old photograph can be like stepping through a wormhole back in time and having a visceral experience from that forgotten moment.

Many of the historical moments burned into our collective consciousness are shown in this exhibit, like the series of early stop-motion images of 1887 Greco-Roman Wrestlers by Eadweard Muybridge and turn-of-the-century scenes like Stieglitz’s “The Steerage,” a photogravure from 1907, showing the contrast between passengers on the upper and lower decks of a ship. With the rising popularity of celluloid film (replacing glass plates), and gelatin silver print enlargements becoming easier to produce, the mid-20th century was fertile ground for the prominent photojournalists. Some fine examples in this show include “Farmer and Son in a Dust Storm, Cimarron County, Oklahoma (1936)” by Farm Security Administration photographer Arthur Rothstein and Alfred Eisenstaedt’s 1945 “VJ-Day in Times Square,” that captures a kiss between a sailor and a nurse.

The number of photographs by women on display in the exhibition is impressive, especially when compared to the male-dominated photography collections of other museums.

There are the well-known stars such as Margaret Bourke-White, Dorothea Lange, and Diane Arbus, but it’s exhilarating to see works by lesser-known masters and innovators like Julia Margaret Cameron, Gertrude Käsebier, Andrea Modica, and Barbara Morgan, who’s 1938 photomontage “Spring on Madison Avenue” is beautifully unique.

The status of photographers as “artists” was hotly debated over the first 150 years of the medium, but artistic photographers have become much more accepted in recent times. Images by those who attempted to elevate their work above the level of mere documentary make up most of this collection and, understandably, an artful photograph by Hungarian photographer Andre Kertész was chosen for the poster and entry signage for this exhibition.

Florida-based artists and college professors Jerry Uelsmann, and Robert Fichter both experiment with surreal images and have influenced generations of photographers. Uelsmann’s gelatin silver print “Small Woods Where I Met Myself” is a mesmerizing piece, especially since it was made in 1967, more than 20 years before Photoshop. 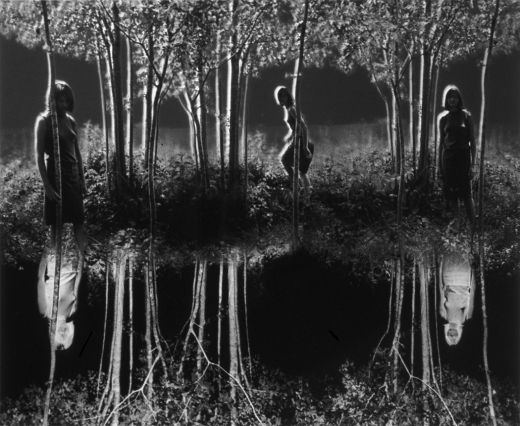 Perhaps no general exhibition would seem compete without photographs by the master, black-and-white landscape photographer Ansel Adams. His piece; “Clearing Winter Storm, Yosemite National Park,” a gelatin silver print, is a jewel of the show. 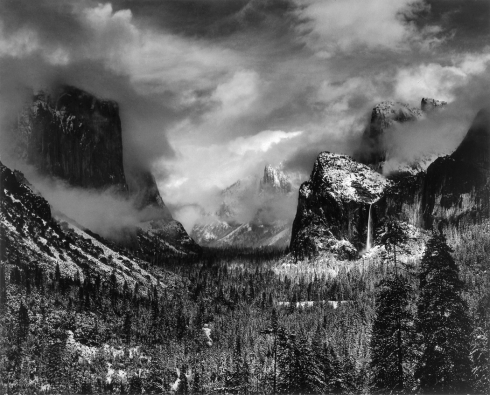 The museum’s photographic holdings of approximately 17,000 images, rivals that of many world-class museums, and this carefully selected exhibition of humanity’s photographic mementos takes visitors on a visual excursion that won’t soon be forgotten.

Photographer • Artist • Journalist • Archivist • Vandal END_OF_DOCUMENT_TOKEN_TO_BE_REPLACED
This entry was posted on Thursday, November 17th, 2016 at 5:42 pm and posted in Uncategorized. You can follow any responses to this entry through the RSS 2.0 feed.
« Basquiat: The Unknown Notebooks
Dazzio Art Experience exhibits Holocaust paintings at new location »