Late in the 1980s, burgeoning New York art collector Larry Warsh acquired a series of eight, common composition notebooks from members of a seemingly-defunct and little-known band called “Gray.” Those notebooks sat boxed in a closet of Warsh’s Manhattan apartment for more than 25 years. Now they are on a touring exhibition from the Brooklyn Museum, with stops at the High Museum of Art in Atlanta, and the Pérez Art Museum in Miami, and the books are likely reaching a much bigger audience than the band ever attracted back at C.B.G.B.’s in 1980.

Of course, these aren’t just any notebooks. “Gray” isn’t just any band born in the Bowery. And it turns out that Larry Warsh is a damn good judge of groundbreaking art.

The sparsely-filled books contain years of hand-written notes by revolutionary artist Jean-Michel Basquiat and they seem to offer a peep-hole in to the mind of that unconventional genius. This exhibit presents pages from the notebooks alongside a selection of his larger compositions, providing the visitor an in-depth exploration of the Basquiat lexicon that is both verbal and visual.

View from the Basquiat exhibition at the High Museum of Art.

Basquiat started the band, eventually called “Gray” with performance artist Michael Holman in 1979. They, with various other bandmates, played their ambient/industrial music at the usual downtown haunts, but with growing recognition of his visual artistic talent, Basquiat left the band in mid 1980. It was right about then his career seemed to lasso a shooting star and the artist struggled to hold on tight for as long as he could.

Surviving band members reunited to play at Basquiat’s memorial service in 1988 and again more recently for art happenings and music festivals. In 2011 they even released a “new” album “Shades of…” which includes cuts of  the late Basquiat’s voice and music.

GRAY – SHADES OF… from Plushsafe Records.

But this is about the notebooks… 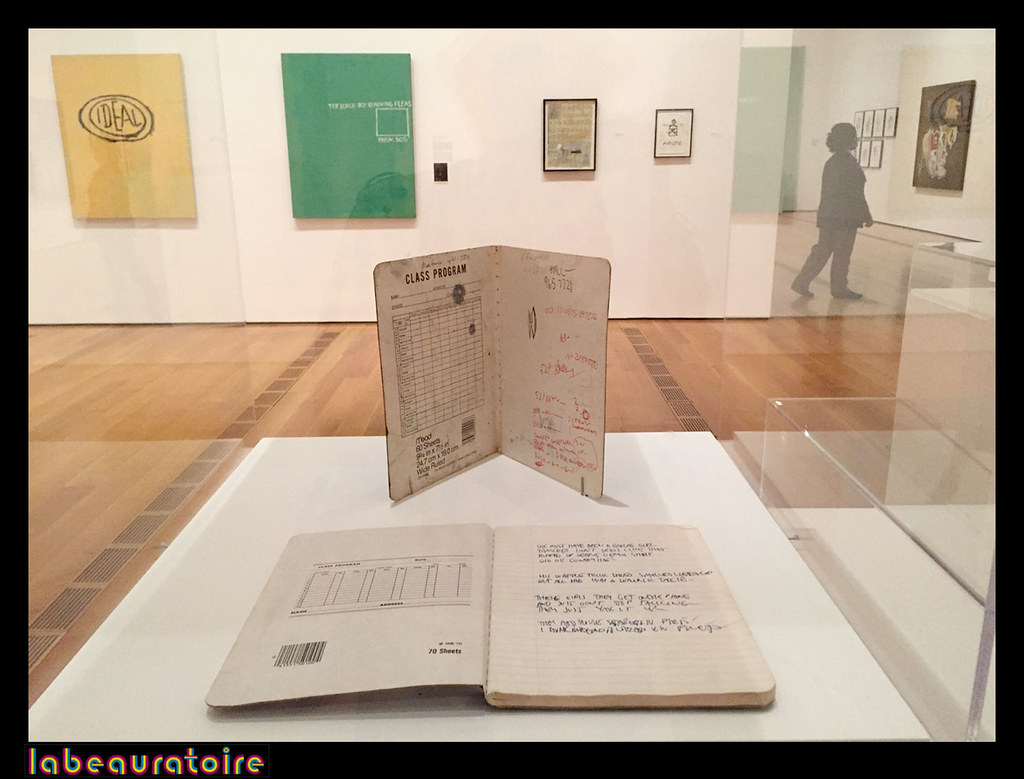 View from the Basquiat exhibition at the High Museum of Art.

Since the beginning, Basquiat’s artistic efforts have focused on words and short phrases. The SAMO@ graffiti he perpetrated with school friend Al Diaz in the late seventies often seemed like excerpts of Beat poetry.

Even after his painting evolved from street walls, to paper and fabric, to canvas and wood installations, these words and phrases infiltrated every aspect of Basquiat’s artwork. In fact they seem to be the actual essence of it, merely enhanced by the more visually dominant graphic elements. 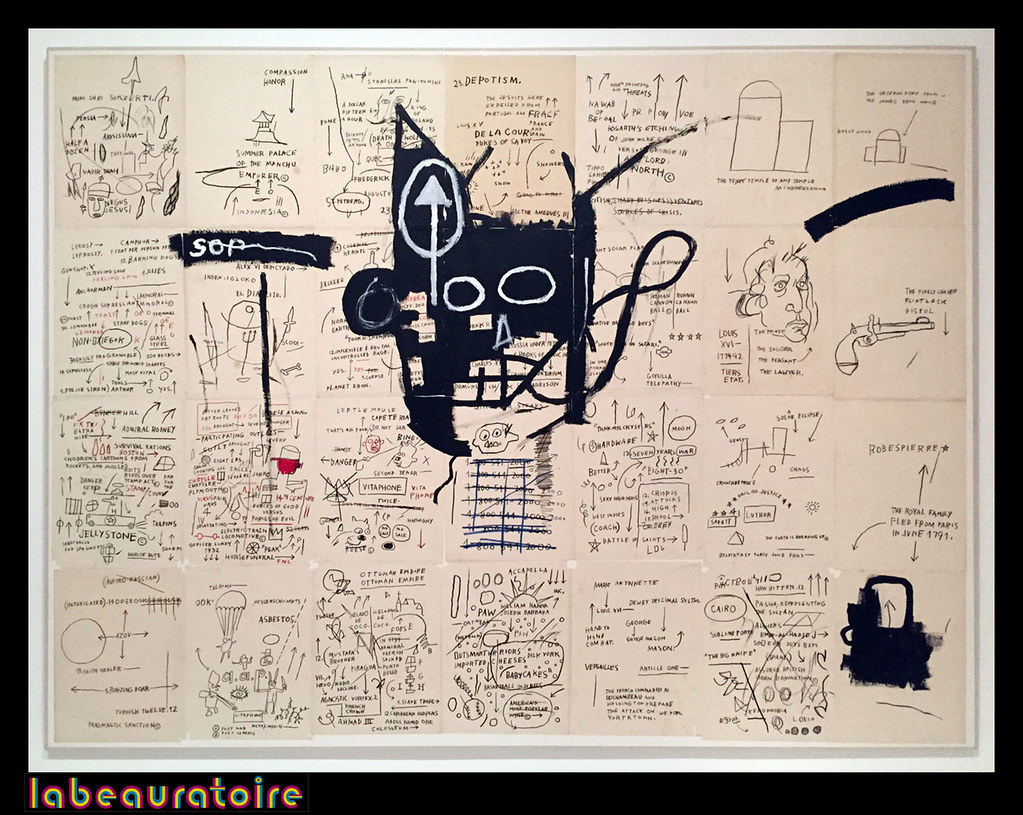 This first major exhibition of the books displays 160 pages of the artist’s personal writings, sketches and notes, accompanied by other drawings, paintings and historical Basquiat ephemera. The pages on display often reveal a kind of evolution on many of the subjects he used in his more extensive paintings, along with those iconic motifs like figures, faces and crowns. 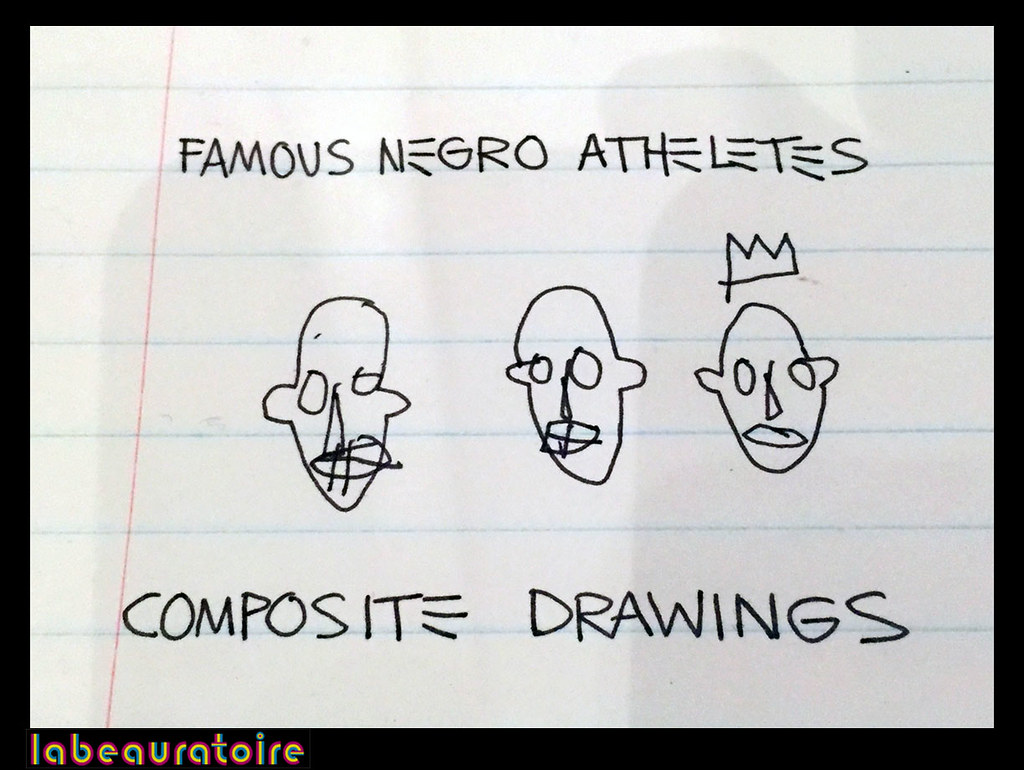 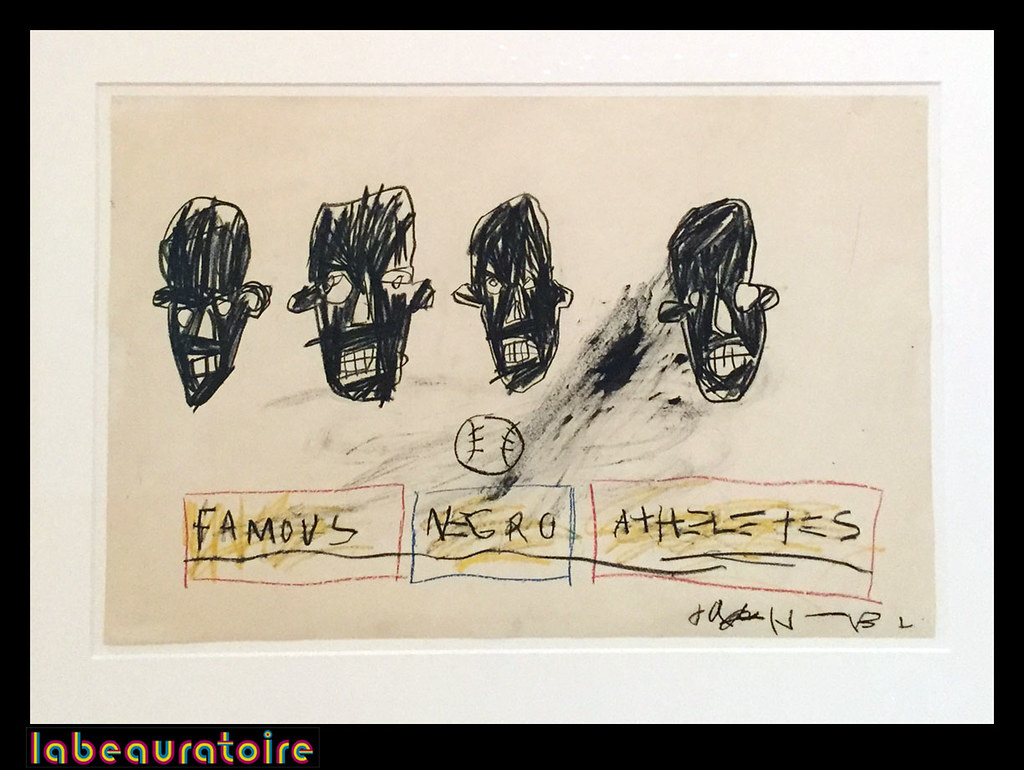 Basquiat developed a unique way of using language the way other artists used paint, or filmmakers use footage. The notebooks seem to be like mental scrapbooks for the artist to collect and manipulate phrases and ideas.

The exhibit presents them as “autonomous works” and not the “preparatory studies” of a sketchbook. But they do have a sketchbook feel to them, only these sketches are made with words instead of line and shadow.

This brings me back to the Beat Poets, and Kerouac in particular. On the back cover of my copy of the book: “Jack Kerouac Book of Sketches“, (Pengiun 2006), it says:

“…Ed White mentioned to Jack Kerouac ‘Why don’t you just sketch in the streets like a painter but with words.’ White’s suggestion is credited with helping to inspire Kerouac’s move to spontaneous prose.”

Here’s an excerpt from a Kerouac “sketch” in Massachusetts.

A ridiculous NE
tumbleweed danced
across the RR bridge

Many of these Basquiat notebook pages have a very similar feel…

Just as other collage artists like Ray Johnson and Robert Rauschenberg collected little snippets physically from newspapers, letters and trash piles, to later assemble and re-arrange in their artworks, – Basquiat seems to have been collecting these snippets verbally instead. He collected them in the notebooks by writing them down when he read them, heard them, witnessed them, or just thought them up.

While many lines are filled with these intriguing collections of phrases, and developing ideas, other pages do indeed feel more like finished works of art on their own.

Looking closely at the intricate structures of words and lines on the pages, one can hardly resist recalling the obvious influences of seasoned contemporaries like Rauschenberg and Cy Twombly. 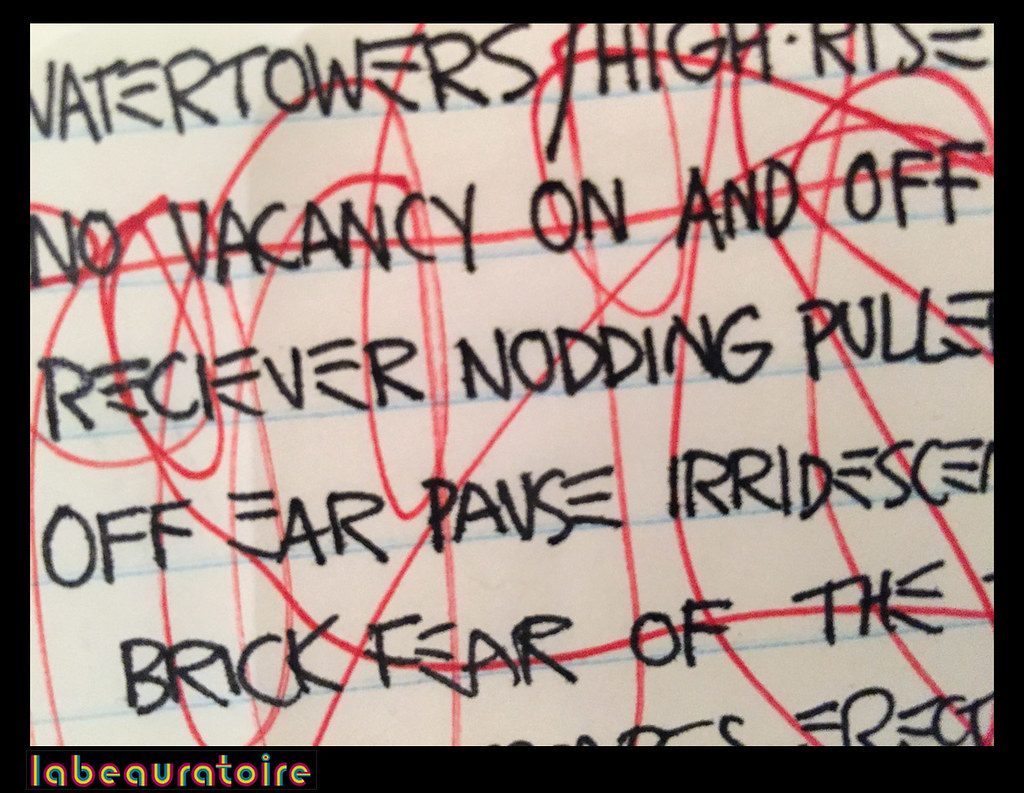 Basquiat – detail from page of Notebook #4 – Collection of Larry Warsh.

In addition to these rarely seen notebook pages, some of the more emblematic Basquiat works are traveling with the show. These larger compositions, canvasses and collages add a pleasing compliment to the exhibition.

Views from the show at the High Museum of Art in Atlanta. 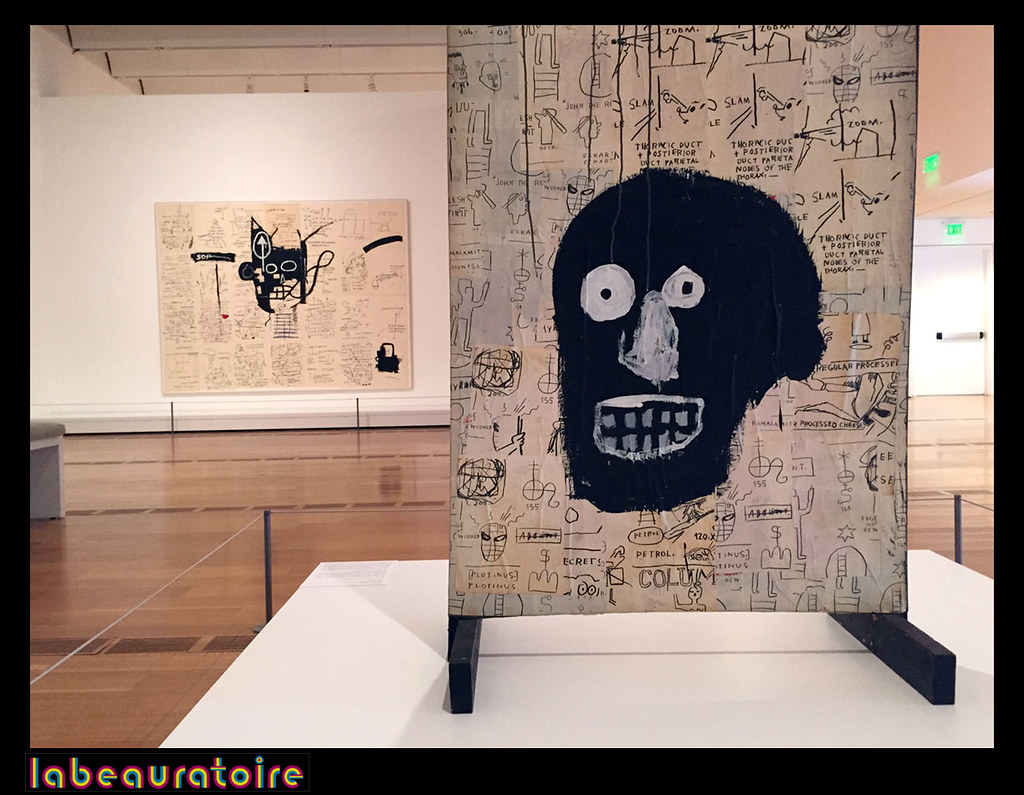 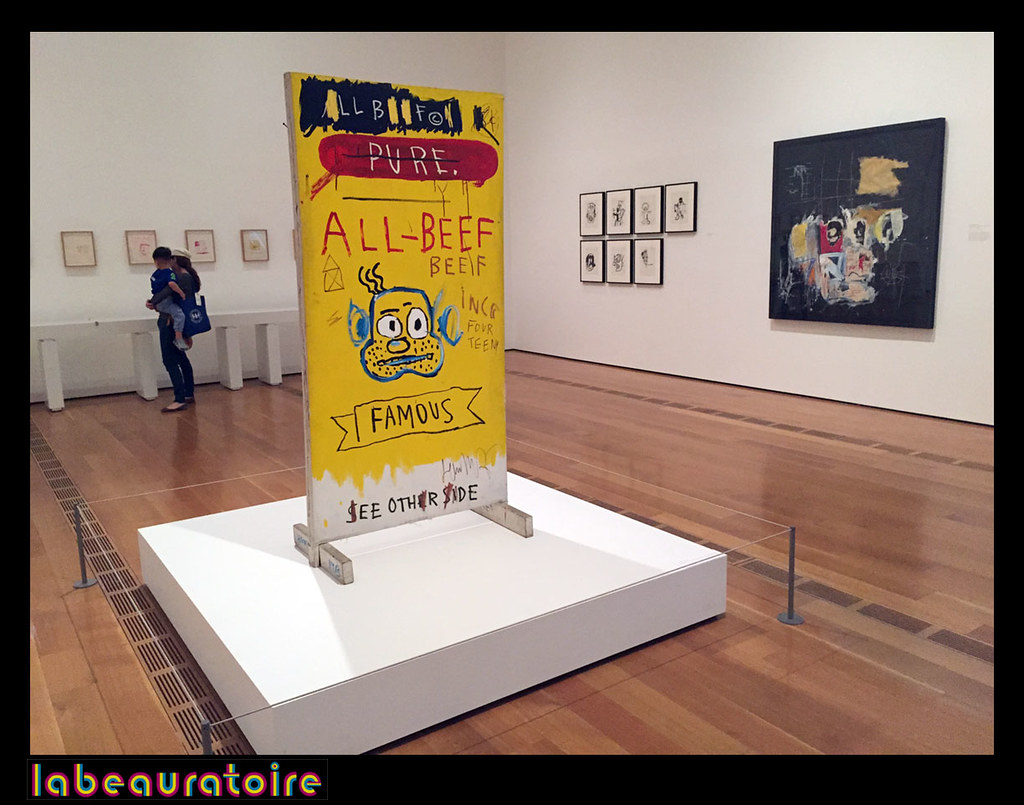 Some of the most precious little items in the show are the rare mementos of the artist’s life, such as the Brooklyn Museum Junior Membership Card signed by a young Jean-Michel Basquiat. 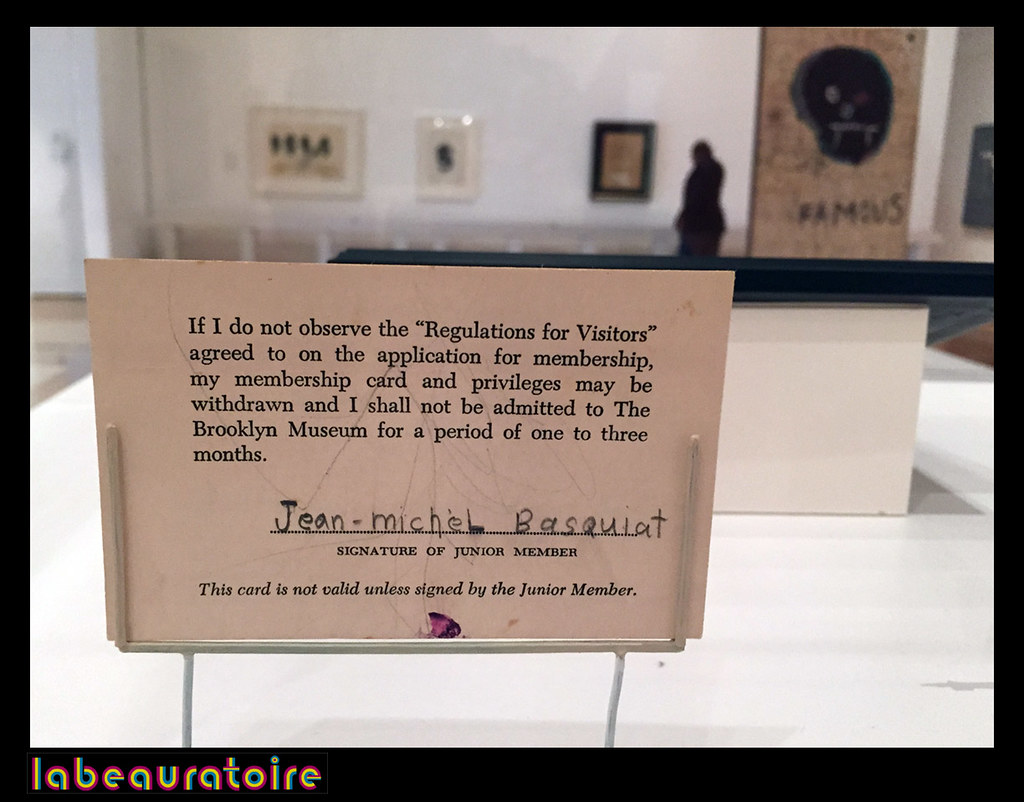 And the unforgettable Polaroid photograph by cohort Andy Warhol. 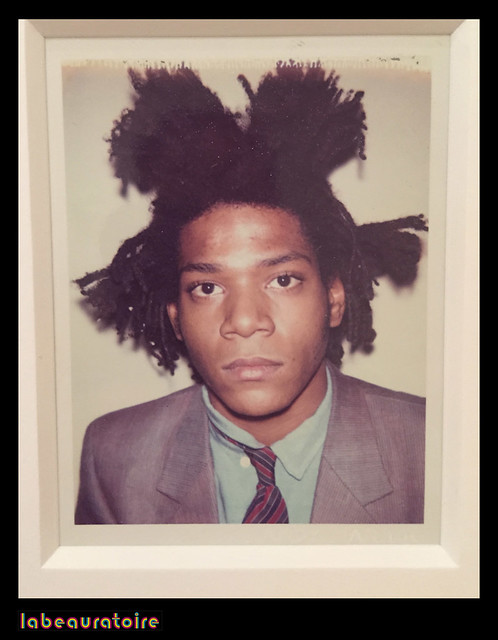 Jean Michel – Basquiat Polaroid 1982 – by Andy Warhol on loan from private collection, seen at The High Museum of Art.

These additions provide a much wider scope for viewing the artist’s work, making this a unique opportunity for both longtime aficionados, and Basquiat newbies alike.

As notebook owner Larry Warsh expressed so perfectly in an April, 2015 Q&A article for Departures by Laura van Straaten:

“No one can have a complete picture of the inner workings of any artist, but the words on these pages give us a glimpse of the soul behind this complex, creative persona.”

While I highly recommend attending this exhibition if you can, I can’t help myself from wondering what else Warsh might have stashed in that closet of his…

Financial Times: “Larry Warsh on his approach to collecting” by Peter Aspden

TEXT AND PHOTOS BY LANCE ARAM ROTHSTEIN (except where noted.)