An Odyssey of Imagery: Joel-Peter Witkin at Keitelman Gallery Brussels

Joel-Peter Witkin “Love and other Reasons”

NOT FOR THE TIMID OR EASILY OFFENDED.

Don’t miss this rare chance to experience an odyssey of imagery in the photographs of infamous American artist Joel-Peter Witkin. His unmistakable style combines caustic and corrosive techniques with traditional darkroom printing to present a unique and often startling tableau. Calling on a wealth of symbolism from mythology, legend, and painters of the past, Witkin composes meticulous scenes in makeshift studios with subjects spanning the entire experience of human life, and death.

Joel-Peter Witkin was born in New York in 1939. After honing his technical skills as a documentary photographer in the US military, he studied visual art and received his MFA from the University of New Mexico. Witkin still lives in Albuquerque where he continues to innovate and build on his well-established career. This exhibition “Love and other Reasons” at the Keitelman Gallery brings together a wealth of different pictures, mostly from the last fifteen years.

Viewing Witkin’s images is not an endeavor to be taken lightly. Many have castigated the artist and his work and even some of his fans find it difficult to look at. Witkin often uses human body parts and corpses in his photographs and the people who pose for him fill the spectrum of humanity, from the traditional beauties to the drastically deformed. Witkin himself once advertised for models exhibiting “…all manner of visual perversions…” and that is what the viewer will encounter in his images. 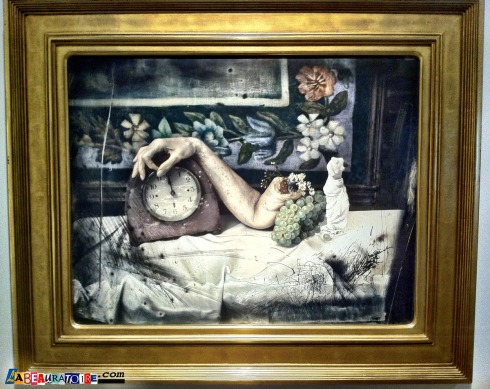 But perversion is not what Witkin sees, and those who “get” his work also see the beauty that can be found in the compositions he presents. Recalling still-life paintings by the Flemish masters, many of his photographs gather an ensemble of objects with an infinite capacity for symbolic interpretation, and like the “vanitas” of the 17th century Witkin uses these symbols to spark introspection.

Witkin uses his lens and his creativity to shine a light in to the darkest corners of the mind and of human existence and asks us to consider, what is the nature of life, of death, of beauty, of fear? Do we look in the mirror and see the transitory nature of all life and earthly endeavors?

“Hellish” is a word that can often be conjured when viewing Witkin’s work. And like the demon-filled representations on medieval church walls, these photographs offer a story that is more powerful than mere words can express.

Don’t be alarmed and ask “what’s the world coming to?” He’s not subjecting you to anything that Hieronymous Bosch didn’t envision six hundred years ago. But unlike Bosch, Witkin’s story is not about exposing evil. On the contrary, his pictures embody an innocence of sorts. It’s easy to look away. To dismiss them as merely provocative. But look more deeply into the images (and into yourself,) and you may glimpse what Witkin is searching for.

“There’s two times in life where you’re totally innocent: before birth, and at death.”
– Joel-Peter Witkin

If you can gather the mental constitution to let go of your preconceptions and step through the looking glass provided here, you’ll be rewarded with a wealth of stunning images you’re not likely to forget. Witkin is certainly a master of his craft. He can invoke the spirits of Dante and Dalí and bend them to his will.

With a cadre of dedicated assistants, he often spends days sketching and laying-out his elaborate scenes before any photography occurs. He then spends as much time again working the negatives and prints into his unique mixture of photo, graphic, collage, and chemical reaction.

This exhibition at the Keitelman Gallery offers a fairly wide array of Witkin’s work ranging in time and subject matter. Many of his newer pieces include almost vibrant colors, not a characteristic often associated with his earlier work. And some of the photographs have been hand colored, where previous prints of the same image were only presented in black and white. Painting and collage elements have become more prevalent in Witkin’s arsenal of visual weaponry over the past ten years, proving the artist has not ceased evolving.

Witkin is not an artist resting on his laurels. He continues to investigate the nature and meaning of human experience when many others have resorted to platitudes. With a well-weathered soul he still searches for that common innocence that lies within the essence of all things. And though it might remain just out of reach, Witkin keeps taking up the challenge.

Joel-Peter Witkin “Love and other Reasons”

PHOTOGRAPHS WITH THE “LABEAURATOIRE” LOGO BY LANCE ARAM ROTHSTEIN

ALL OTHER IMAGES ARE FROM THE KEITELMAN GALLERY WEBSITE 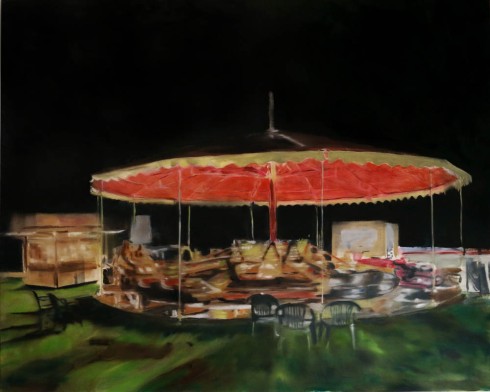 This large canvas of a carousel in the front window, beckons all who pass by, to enter the Delire Gallery in the Ixelles art district of Brussels. Inside the small, bright space are six more from Pierre Lefebvre’s series of seven new paintings.

Unless you have a French heart, (or perhaps a Russian one,) it might be slightly difficult at first, to find cohesion between the images presented in this exhibition. The vibrant swirling carousel is accompanied by four medium canvasses, each depicting a solitary pigeon on cobblestones, one of a large, gray section from an anonymous cemetery, and a small, lovely and colorfully detailed painting, which appeared to my American eyes to show a fancy fan-pull.

But after a short guide from gallery owner Sébastien Delire, the brilliance of this ensemble becomes blindingly clear.

Transported back to our childhood, we see the carousel spinning round and round with blurring speed. Each vehicle is a path of destiny.

The gallery’s accompanying pamphlet (which I did not read until later,) states it perfectly:

“On which ship did you escape reality? Which animal took you on a travel?
A rocket, an elephant, a tank, a carriage, the police motorcycle, the horse?”

What did you dream of? Which path did you choose in life?

Next comes the large room. Each of the four walls carries a single canvas, (two shown here) framed alone by the vast whiteness. Four depictions of a pigeon, walking around on cobblestones, seemingly aimless. 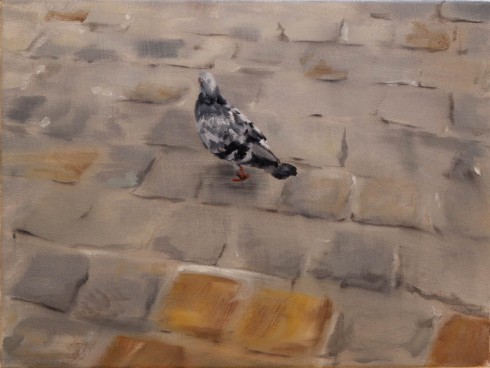 Aren’t we all like this pigeon? Slightly confused by our surroundings, just trying to make it through life, get some food, avoid harm, not quite sure what’s coming next.

The viewer must turn in a circle to see each painting in this room.

Do you still feel like you are on the carousel?

In Lefebvre’s previous exhibition. I noted that he had a knack for capturing obscure little snapshots of life, small vignettes depicting scenes that most others wouldn’t think twice about. And these pigeons are like that as well. As we all walk, drive, ride our way through life, how often do you stop to notice the pigeons? They’re always there, going about their business. Trying to make due, same as you. It’s always the children who have a free enough spirit to get excited about pigeons on the street. Well… children and those photographers with the heart of a child. In every square you can see children running toward the pigeons, scattering them like a cloud of magic dust, and also a photographer, crouched inconspicuously, trying to capture them in motion.

Lefebvre, with his child’s heart and snapshot-like paintings, has captured them here and presents them for you to consider, in a manner you’re much more comfortable with. Art on a wall.

Do you feel more grown-up now?

Good, because now we move on to the next room.

The final room is much more cramped and poorly lit. The exact opposite of the previous room. Here there are two paintings on opposing walls. One is a very large, drab canvas that looms from high on the wall. It depicts a section of graves in a cemetery. Yes, death comes for us all. I will not try to represent this imposing painting with measly pixels. Go see it for yourself. Even being there I felt I had to step out of the room, backing up to try and take it all in. But you can’t really accomplish that task. You’re forced to be in the room with it. It invades your personal space. You must confront it, or turn away.

And in turning away, Lefebvre, with a wink, gives you a little chance at a way out. 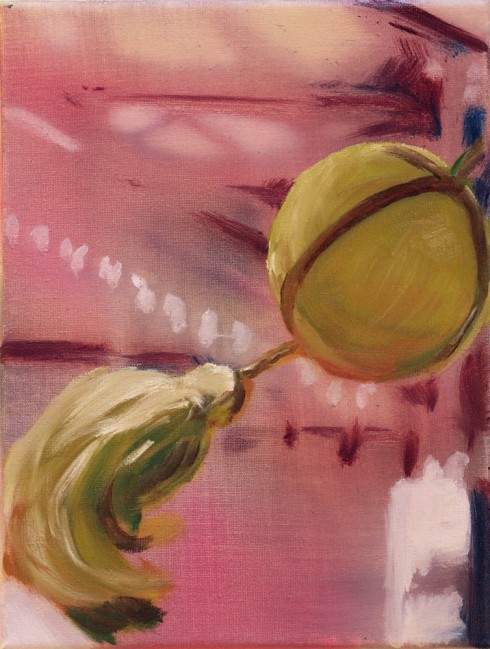 This small painting I thought was showing a fancy fan-pull, is actually a traditional feature of some European carousels. This small ball and tassel, similar to the Brass Ring on some American carousels, is dangled barely within reach of the riders.

If you are lucky enough to grab the right one. You get to ride again!

Can you reach it? Do you get a Free Life? Re-start? Do-over? Reincarnation?

What will you dream of this time?